Safely housing aircraft in hangars poses some unique challenges. These high-value assets contain flammable fuel and are often in close proximity to ignition sources so the potential for fuel spill fires is very real. To address this issue, many hangars have foam fire suppression systems. In fact, they can be compulsory as set forth by National Fire Protection Association (NFPA) codes depending upon the type of hangar and associated activity within it.

These systems can automatically and effectively extinguish a fire by smothering it. However, they are not without risks — risks that can be especially concerning given that hangar foam fire suppression systems are known to discharge inadvertently in many instances. Consequently, the pros and cons of foam fire suppression systems are frequently debated by stakeholders including aircraft owners, hangar operators/owners, fire safety experts, trade associations, FBOs and others. 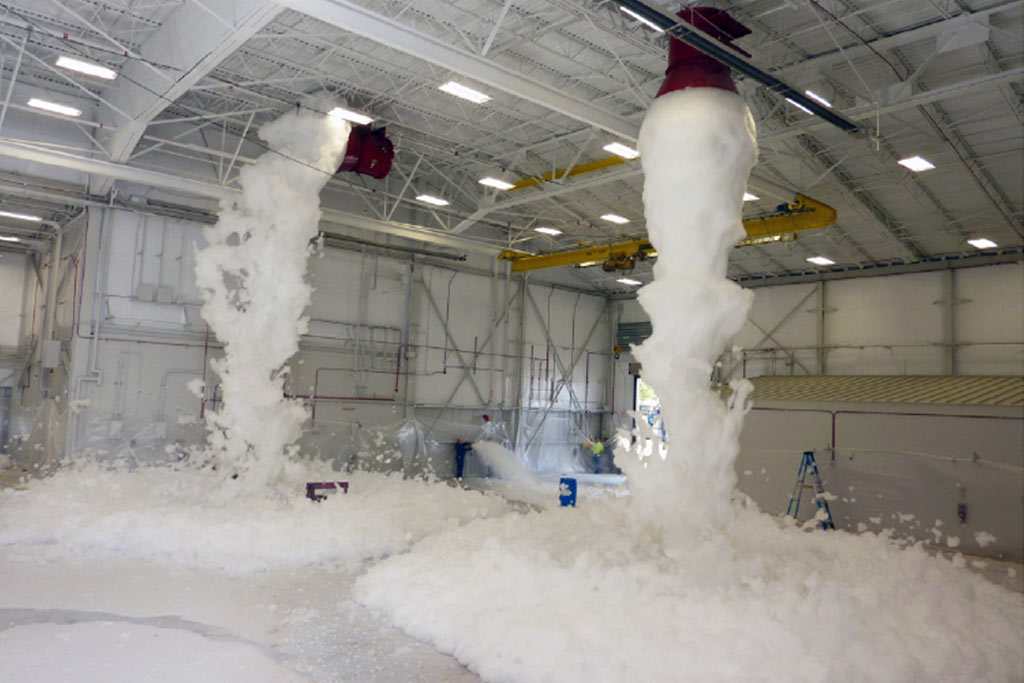 When a hangar foam fire suppression system inadvertently discharges the results can be damaging or even deadly. For example, in 2014 a civilian worker at Eglin Air Force Base died after being trapped in a foam-filled hangar during an inadvertent system discharge.

These are just some of the issues resulting from false activations of foam fire suppression systems.

NFPA 409 was defined to be the “standard that helps safeguard life and property through the requirements for the proper construction and fire protection of aircraft hangars used for aircraft storage, maintenance, or related activities.” While no one in aviation would dispute that NFPA 409 is well-intentioned and that adhering to it is critical in many circumstances, some people do question whether perhaps it goes too far and is too burdensome in certain applications.

This sentiment is especially strong from certain aviation industry stakeholders who have experienced the aftermath of an inadvertent discharge of a hangar foam fire suppression system. In fact, whether it is aircraft owners or hangar operators to experienced claims personnel at Global Aerospace — almost none can recall a single situation where a fuel spill fire erupted necessitating the release of a hangar foam fire suppression foam. In the ongoing cost/benefit analysis around NFPA 409 and hangar foam fire suppression systems, they tend to see the risks and expenses as outweighing the advantages. Supporting their opinion are a number of incidents on record in which foam was discharged even though there was no fire, and as a result, property was damaged and lives were put at risk.

Beyond Debate: Some Experts Advocate for Change in Hangar Foam Fire Suppression Codes

For many industry experts, discussion of hangar foam fire suppression system requirements has moved beyond casual debate to actively advocating for change. Mercer Dye, founding member of Dye Aviation Facility Architecture, LLC, is one such expert. “My goal is to eliminate foam fire suppression in Group II hangars,” he says. And as a backup member to the NFPA 409 Technical Committee and someone who has pushed for change for more than a decade, his opinions are well-informed and strongly held.

Mr. Dye’s primary argument is that the requirements of NFPA 409 are not in line with the relative fire risks. He also points out that while there are few, if any, documented events in which a fuel spill ignited and triggered a foam fire suppression system, there are many reports of false activations and a growing belief that this is occurring too frequently.

To test the validity of assertions that foam fire suppression systems are more often than not activated inadvertently, we looked at our own claims data going back more than a decade. As we explain in our hangar foam white paper, in that period we did not discover a single example of intentional discharge of a system in response to a fuel spill fire. We did, however, find many claims where the description included phrases like “inadvertent discharge,” “erroneous operation of fire suppression system,” and “uncommanded activation” among others.

We also found a slight increase in both the frequency and severity of claims related to the inadvertent discharge of foam since 2013. And while claim values vary, one single event in 2018 resulted in costs exceeding $25 million to repair damage to various aircraft and other hangar assets. Again, this review considered only Global Aerospace’s data. Even so, it is valuable food for thought.

Why are Inadvertent Discharges so Common and Who is Responsible?

When stakeholders learn about the frequency of foam fire suppression system incidents, their first question is often, “Why are inadvertent discharges so common?” According to experts, the reasons for false activations include:

These issues tend to arise more commonly early and late in the lifecycle of a foam fire suppression system.

Who is financially responsible for an inadvertent foam fire suppression system deployment? This can vary widely based on the specifics of an incident and contractual agreements between the parties involved. For example, in some cases, the “fine print” in a hangar lease may absolve the landlord of any liability for damages that occur to aircraft.

The same can be true for the company that installed or maintains the system. Their contract may have a clause that limits liability. So, it is important to keep in mind that it can be difficult to recover damages caused by an inadvertent foam fire suppression discharge event and therefore it is prudent to negotiate reasonable and fair contracts ahead of potential losses where possible.

Given what is at stake for aircraft owners, hangar operators/owners, aviation company employees, insurance companies, and others, it is not surprising that the debate continues about hangar foam fire suppression systems and whether NFPA 409 should be modified to account for technological advances in aircraft manufacturing and in modern-day hangar environments. To learn more about these systems and Global Aerospace’s role in the ongoing conversation, download our white paper titled, “Hangar Foam Fire Suppression Systems: More Harm than Good?”

If you have questions about our aviation insurance products, please contact us at your convenience.

When people think of aircraft insurance, what typically comes to mind is cover for accidents, hard landings and the like. In fact, most “technical” pricing of aircraft insurance uses only operational statistics and basic exposure data points (aircraft values, passenger numbers, etc.) to determine equitable premiums.